Kioa Island Primary School has five teachers providing classes for 106 students from kindergarten to year 8. After year 8 the students either finish school or they board on the larger island of Taveuni to continue their education.

Before the solar system the school’s highly valued electrical equipment included three computers, one printer, a photocopier, PA system and laminator. Limited daytime power to the school was supplied by a small old generator or another larger one that often required costly repair. The school has night power supplied by the village generator that runs for three to four hours in the evenings. Therefore power storage need (batteries) is less than is other schools who need power for night study and/or teachers quarters.. 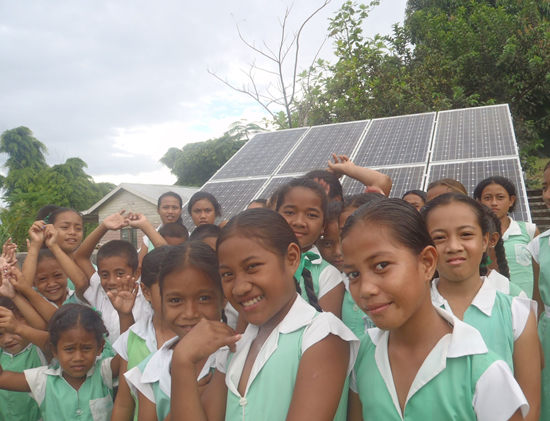 We predict that their new solar system will deliver a fuel saving that increases teaching resources by approximately 20%. It will also result in a carbon dioxide saving in the order of 60 tonnes over the life of the system.

A laptop and camera were provided for both learning and to help students share their learning experiences with overseas schools. Also, a data projector so the computing experience can be shared by a whole class. The projector will also be used to show movies once a week for villagers and create an additional small cash flow for the school to pay for their internet usage. Thanks to the generous support of two Australian schools they have large supply of movies.

Since the solar system was installed the school has now gained six new computers and computer classes have started. A teachers put one computer aside and every student in the two older classes unpacked the computer from the box; set it up; opened applications; shut it down and repacked it. That was so all students are familiar with these basics — so important as many of these kids have not touched a keyboard before.